Power did not corrupt Mandela: lesson in leadership 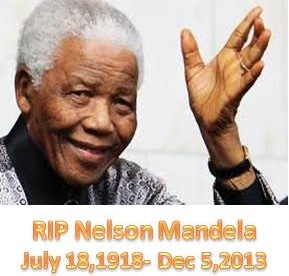 Every leader in business or public life must wonder at the enormous global goodwill and affection on display at the Nelson Mandela funeral today. What was it in Mandela that inspired people worldwide? Mandela was one leader who power did not corrupt.

But first some background about the quote " Power tends to corrupt and absolute power corrupts absolutely." Attributed to Lord Acton in the  19th century, the classic quote seems true even today. Wherever you look, you see leaders trying to hold on to power in different cultures,countries and organizations right from the village elections to national elections, let alone the out and out dictators of the world. The cynical part of  Lord Acton's observation is that once someone has absolute power like Mandela the first black president of South Africa after ending apartheid, you can be be sure that the person would be taking revenge. Payback to South African whites for 27 years in prison and numerous insults under the apartheid regime.Revenge and retribution, given an opportunity, being a particularly noxious form of corruption. Shockingly, Mandela chose to forgive his tormentors and instead promoted peace,harmony and recociliation among all sections of South African society.

Just to recall, Mahatma Gandhi was thrown out of a first class railway car in South African because of his color in 1893, much before apartheid launched officially in 1948 and ended in 1994. It was the pre-apartheid experiences in South Africa that motivated Gandhi to liberate India from colonial British rule in 1947. Notably Mahatma Gandhi never held formal leadership positions in the Indian Government. Even if he had, he would not have sought retribution, despite an estimated 61/2 years in jail.

There are two conditions here. First a leader like Gandhi or Mandela is treated very badly for standing up for some much needed change including jail time. Second, the required change happens and the leader finds himself in power. Formal power for Mandela as President of South Africa and great and enduring power without formal office as for Gandhi. These leaders, when in power try to unite everyone rather than dividing them.

No "winner take all" policy here.... a new CEO comes and replaces everyone, in some cases several management layers in the entire organization, starting with the secretary and chauffuer. Whoever remains feels alienated. Contrast this with Mandela and the white Afrikaner guard Rory Steyn, who was tapped to be President Mandela's personal security guard in 1994.

As President, Mandela served only till 1999 or 5 years. This one is quite remarkable when you see all manner of monarchs, political leaders and of course business leaders who just do not want to give up power. Hopefully, the fact that there were four US Presidents at the Mandela funeral including Barrack Obama, George W Bush, Bill Clinton and Jimmy Carter sent a message to the assembled leaders and the world audience that the US has a cap of two terms for the US President that total a maximum of eight years. And that it's perfectly alright to be a respected former President.

Some things to think about, in this holiday and giving season, as we remember Mandela.  Contact StratoServe.